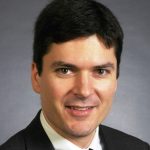 Stephen Lange Ranzini is president and CEO of University Bank and president and CEO of University Bancorp, Inc. (Listed OTCQB under symbol UNIB.) He was born in New Brunswick, New Jersey and grew up in Somerville, New Jersey area, where his father was a pioneering civil rights advocate for the Italian-American, African-American, Polish-American and Jewish communities in Central New Jersey.

At the age of 23, after graduating from Yale University as a needs-based scholarship student, Ranzini convinced Bank One Corporation to lend $3.2 million to a newly formed corporation of which he was president & CEO the monies necessary to buy a bank in a leveraged buyout, assisted by his family. He then became the youngest bank holding company president in the U.S.A. in July 1988.

Under his leadership, University Bank has become one of the top performing banks in the country. We have won the “Banker of the Year” award from both the American Bankers Association & American Banker magazine. Our track record includes:

34 years ago when he joined University Bank, it had just 21 employees & managed $34 million in assets. Today we have 537 employees, manage over $38 billion in assets, originate over $2 billion in loans annually & serve over 195,000 customers.

Ranzini has received national media attention from NPR and The New York Times for his role in founding faith-based lender UIF Corporation, a subsidiary of University Bank, which serves the large number of Muslim, Hindu, Jewish, and Christian customers who wish for religious reasons to avoid paying or receiving fixed interest contracts.

In 2021, Ranzini received a Diversity, Equity and Inclusion (DEI) Lifetime Achievement Award from Crain’s Detroit Business for his successful efforts to end mortgage redlining in Ypsilanti, Michigan and for the faith based lending program he founded.

As a needs-based scholarship student, Ranzini graduated from Yale College in 1986, earning a BA with a Double Major: East Asian Studies (Japanese) and (Economic) History. While at Yale, he was involved in many extracurricular activities including serving as Co-Founder and Founding Publisher, 1986, of “The Yale Herald” weekly newspaper; Co-Founder and Founding Editor-in-Chief, 1984-1986, “Yale Business Bulletin” monthly economics and business magazine; and Chairman and Managing Director, 1984-1986, Yale College Student Investment Group, which manages a portion of Yale University’s Endowment.

Ranzini served as the President of the Yale Alumni Association of Michigan, from October 2003 to January 2009, and as one of the 350 Delegates to the Yale University, Assembly of Yale Alumni, from August 2004 to June 2007.